Laminated shingles have quickly gained in popularity in recent years, thanks to their long life and enhanced curb appeal. Let’s take a closer look at this type of shingle, and what makes it a great choice for both homeowners and roofing contractors in Vancouver.

For decades, the 3-tab asphalt shingle was the residential roof covering of choice. The uniform look of the 3-tab shingle hasn’t changed over time: a piece of shingle about three feet tall and one foot high is cut twice on one side, forming three rectangular tabs. During installation, the shingle slab is overlapped with other shingle rows and nailed down, so that only the tabs are visible.

Laminated shingles are an updated version of the standard 3-tab shingle, featuring an extra layer laminated to the lower half of the shingle, which makes the tabs twice as thick. Tabs are cut into varying lengths and with large, randomly spaced gaps. This staggering creates a natural depth on the roof that is visually appealing and can mimic higher-end roofing materials, particularly when different shades, tones and colors are used (it’s also why this type of shingle is sometimes referred to as the “architectural shingle”).

As the one of the leading roofing contractors in Vancouver, Crown Residential Roofing loves to install laminated shingles and other quality roofing products for area homeowners. How can we help you? Call us at at (877) 907-3066! 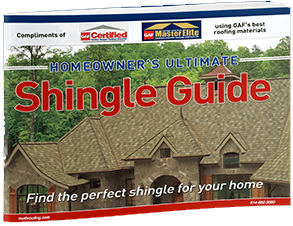